The Shiho Bugei Kai or “Four Directions Martial Arts Society” was created by Sensei Michael J. Kriegisch (Hanshi, RHKK) in 1997 with the permission of Daisensei Seikichi Odo. The SBK was an affiliate organization under the former Okinawa Kenpo Karate Kobudo Federation and the current Ryukyu Hon Kenpo Kobujutsu Federation, both headed by late Daisensei Odo. It was created as an affiliate to have more financial control and stability for Sensei Kriegisch’s students while maintaining direct allegiance to Daisensei Odo and his federation.

With the death of Daisensei Odo in 2002, the Shiho Bugei Kai began to take on more prominence as a standardization and advancement body for the now fractured and stagnant RHKKF. The Shiho Bugei Kai started to form the nucleus of Yudansha practitioners who followed Sensei Kriegisch and his efforts to preserve the legacy of Daisensei Odo’s body of knowledge (primarily his katas and techniques) and were not resident students in his Honbu Dojo.

The Shiho Bugei Kai, with the initial adoption of this manual, brought into being a regulated and institutionalized operating procedure for dojos around the world to learn, standardize and teach the legacy of Daisensei Odo, under the guidance of Sensei Kriegisch, the Executive Officer of the SBK. 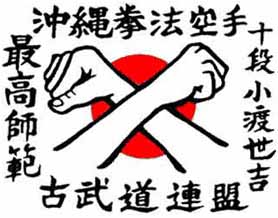 The Shiho Bugei Kai’s name (Four Directions Martial Arts Society) seems at odds with Daisensei Odo’s “Shudokan” or “one way keep straight” philosophy. According to Sensei Kriegisch, he chose the name for two reasons. One was to acknowledge the different backgrounds in the martial arts that almost all members bring to the society. This also acknowledges the fact that even from differing backgrounds, all SBK members are committed to keeping the legacy of Daisensei Odo “straight.” The name also represents the philosophy that the legacy of Daisensei Odo should not stagnate. Every faithful practitioner is charged with the advancement of the legacy in all directions. These directions can be figurative or literal.