In the early twentieth century, karate was a regular program for physical education in the Okinawan school system because it increased the health and vitality of the students. Seikichi Odo (1926-2002) was first introduced to judo while in school. He began to study Okinawa-Te at the age of thirteen, with Sensei Matsuda, at the Hanza district (1939). From the very beginning, Seikichi Odo enjoyed karate, and worked hard to excel. 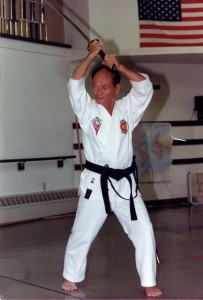 Three years later, at the age of sixteen, Odo changed schools. He studied Okinawa-Te from Sensei Koho Kuba at Kawasaki for the next four years. Sensei Koho Kuba eventually went to the USA to join his son.

After three years, Seikichi Odo switched his study to Naha-Te at the dojo of Sensei Shigeru Nakamura in Nago (1949). Naha-Te was similar to Okinawa-Te and Seikichi Odo continued his pursuit of karate. He continued his studies of Okinawan Kobudo with Sensei Kakazu and Shinpo Matayoshi for six (6) years in Matayoshi’s backyard in Ishikawa before Sensei Matayoshi opened his dojo in Naha.

Seikichi Odo began introducing Okinawan Kobudo at Nakamura Sensei’s dojo with the Sensei’s approval, and supervision. Sensei Nakamura died in November of 1969 at the age of seventy-seven, leaving no designate as Master. 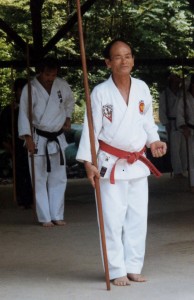 Sensei Odo was one of the first Okinawan masters to incorporate a complete system of Okinawan Kobudo into a traditional karate system, adding the weapons officially to the system soon after his designation as Master. This resulted in the formation of the Okinawa Kenpo Karate Kobudo system in the mid-1970’s, which in turn became the RYUKYU HON KENPO KOBUJUTSU FEDERATION (RHKK) in 1998. The headquarters is in Okinawa, Japan. Daisensei (great sensei) Odo is ranked as JUDAN/ HANSHI (10th Black) in Karate and Kobujutsu, as recognized by his Okinawan peers.

Daisensei Odo has received rank certificates from some of the greatest masters in Okinawan karate and kobudo. Among others these include: